Life has a way of sneaking up on you and taking you off in other directions, especially when creating art. Interests ebb and flow and it was great surprise and sadness that I noted DeRidder Antiques was going out of business. This store has been a fixture here in Forney, Texas, long before I arrived in 2000. The store is hard to miss with a school bus and an old jet sitting in the front of the store!

I recall my initial foray into the store! I was overwhelmed with more visual stimulus than I could imagine! Here was a place that held items I had not seen for years not to mention many I had never seen before. And this was in the store that was on the frontage road. Once you exited the store out the rear you were immediately confronted with a couple of near life size dinosaurs and another, larger store! And it was packed with items from all over the country and from all decades! 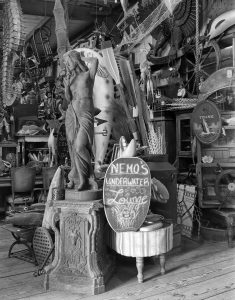 I met the owner Willie, and she said a group of local photographers used to come in when the store was more popular and showed me some of the works they had printed and which she displayed. I asked if I could photograph and she said sure and offered me some coffee. On my return visits, which became infrequent as my job as a police officer and then being deployed to Afghanistan and Iraq cut into my image making, Willie was always at the front and offered coffee and a smile.

On one of my visits I gave Willie a print, Crucifix & White Flowers. She said it was a wonderful image and felt it would bring her strength for her and her son who was struggling at the time. 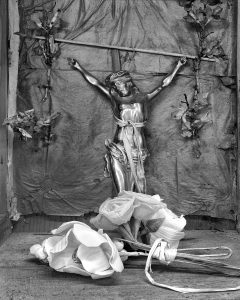 It was magical to slowly walk down the aisles and find new treasures. And it was a delight to go from one aisle to the next as the various items were set up in interesting displays not just piles of old castaways dumped into a barrel waiting for someone to dig through it. No these were wonderful displays to catch the eye and imagination of those who took the time to feast on the lost treasures from earlier times. The towering monster from Frankenstein, altars from a catholic church, a confessional, stain glass windows, a tall statue of Mike Tyson flanked by statues of golfers and caddies, a huge tuna, an old dentist/medical chair, old mannequins sitting around a table playing poker, small treasure of glass items, dried flowers, vases, masks, stained glass, furniture and the list goes on. 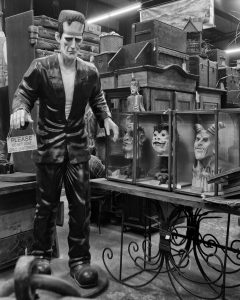 As I mentioned it was with great sadness I noted the “Going Out Of Business” sign on the front of the store. The back portion of the huge collection had been sold off between one of my infrequent visits. I was sad to see so many treasures gone, but time waits for no man and certainly business does not either.

So I created a folio of the images I had made over the years visiting the store. These were made with my 4×5 camera and then scanned and converted to digital to create the folio containing the archival ink prints. You can find them here on my website!

I will miss visiting the business that was as much a museum as it was a time machine, bringing back memories and other times now forgotten.